Termination of play therapy services can be difficult for the counselor and the child. The relationship formed during the months of therapy is one of the most important aspects of the process. Termination activities differ across settings:  some offices provide certificates and some simply said good bye.

Today, I will share a termination activity that has been quite popular in my office.

The truth is that it is also a goal setting activity. So, you can use it at the beginning and the end of therapy.

It started way back in January 2016….I like to call it the Chain of Intentions.

The Inspiration for This Termination Activity

The Chain of Intentions was inspired by a commercial that I watched about the My Intent Project.  According to their webpage,

We believe there is purpose inside each of us and we want our efforts to encourage people to share more truth and inspiration with each other. We are not a jewelry company – we are an intentions project-My Intent Project

Despite their claim not to be a jewelry company, they do in fact, make jewelry. The customer chooses a word of inspiration to have marked on a disc and uses that as inspiration or motivation in their daily life.

(Note…I have no affiliation with the My Intent project and have received no financial compensation from them…this is purely background).

So, I ordered one with my intention for my play therapy practice.

My word was FOCUS. 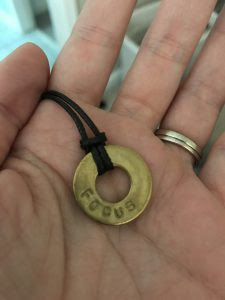 See, I have a habit of saying yes to all opportunities. Those things were taking me away from my core mission which was to use play therapy to help children deal with trauma or other difficulties at home or in school.

I needed to FOCUS.

But, because I could not buy a necklace as a termination gift for each or my clients, I came up with a way to create a chain of intentions with all of the (willing) clients and students that came to my office. The end result was a way for them to leave something behind. A testament to the power of 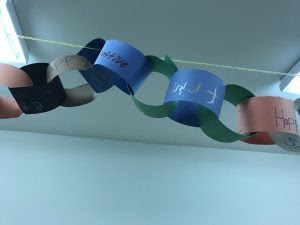 therapy and the work that was accomplished. A motivation for other children that success was possible. And a vision for their future about what could help guide them after therapy was over.

My goal was to get from one side of the room to the other. It took the entire year. My office is big! But as it grew, it became a fixture in the office and I am excited to take it down and start again. And a little sad to see it go. I am thinking that I can use it as a garland for my office Christmas tree. A symbolic way to honor the work of the year and transition into the intentions for the new one. Thanks to Jennifer Taylor for an other great reader submission! Check out more from Jennifer at jentaylorplaytherapy.com