Every Kid with ADHD needs Captain Underpants by Cristina Margolis “Attention Deficit Hyperactivity Delightfulness is how I prefer it.  Everyone else calls it a disorder,” says Dav Pilkey, the popular children’s author of the Captain Underpants series.  When Pilkey was in second grade, he was diagnosed with ADHD (Attention Deficit Hyperactivity Disorder) and Dyslexia.  Like many children with ADHD, Pilkey had a difficult time focusing, staying still, and “behaving properly” in class.  He was constantly criticized by his teachers and he often felt like an outsider in the classroom.

In second grade, Pilkey began creating Captain Underpants comic books, which his classmates absolutely loved.  He had a natural talent for making kids laugh and he loved it.  His teacher however, was not fond of Pilkey’s cartooning at all.  One time, she even ripped up one of Pilkey’s Captain Underpants drawings in front of the entire class, told Pilkey that his comic books would never amount to anything, and sent Pilkey out into the hallway.  What do you think young Pilkey did then?  Well, he did what any other determined and hyperfocused ADHDer would do: He immediately began creating another Captain Underpants comic book!

During Pilkey’s childhood, his parents were very supportive of his passion for cartooning and they never listened to the negative critiquing of his teachers about his ADHD.  His parents embraced his ADHD and helped Pilkey see his ADHD as a remarkable gift.  When Pilkey got to college, one of his professors noticed his gift as well and encouraged him to become a children’s book author.  Pilkey then wrote several children’s books and at 31 years old, got Captain Underpants published.  Pilkey is a classic example of what having supportive and loving family and teachers can do for a person with ADHD.  Twenty years after Captain Underpants was first published, the series is still a huge hit with kids, mine included. 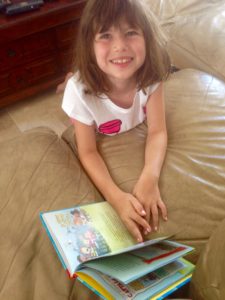 Let me tell you a bit about my own ADHDer.  She is eight years old and before she read her first Captain Underpants book, she hated reading.  Getting her to read her assigned book for school was like pulling teeth.  She complained that reading was boring and a waste of time.  When she got to a big word that was difficult to pronounce, she’d become frustrated and would start crying.  She would also lose her place a lot and would reread paragraphs.  She was also not very good at comprehending what she had read, because even though she was reading the words, she wasn’t really paying attention to the words.

Then one day, Captain Underpants entered her life and Tra-Laa-Laaa, my ADHDer loved reading!  While we were at the library, she asked if she could check out a Captain Underpants book and I said “Yes” of course.  As soon as we got home, she plopped herself on the couch and began reading.  Then she’d lay upside down on the couch and keep reading.  Then, she’d kneel down on the floor and use the couch as a table and keep reading.  Needless to say, she devoured that book.  While she was reading, she was smiling and laughing.  She was really enjoying herself and I have never ever seen her love reading so much.  I have Dav Pilkey and his ADHDmazing imagination to thank for that.  He absolutely has a talent for getting kids, particularly kids with ADHD, to love reading!  The layout of his books are great for kids like mine too.  The words are not overwhelming, the chapters are short, and there is a picture on practically every single page.  There are even mini-breaks from reading the kids take without even realizing it with Pilkey’s Flip-O-Rama feature throughout the book.

Now I know the Captain Underpants series is known for its potty humor, which is one of the main reasons why children love the stories so much, but as a parent of an ADHDer, what I love the most about the series are the relatable characters for my ADHDer and the hidden (perhaps not-so-hidden) messages that kids with ADHD pick up on. 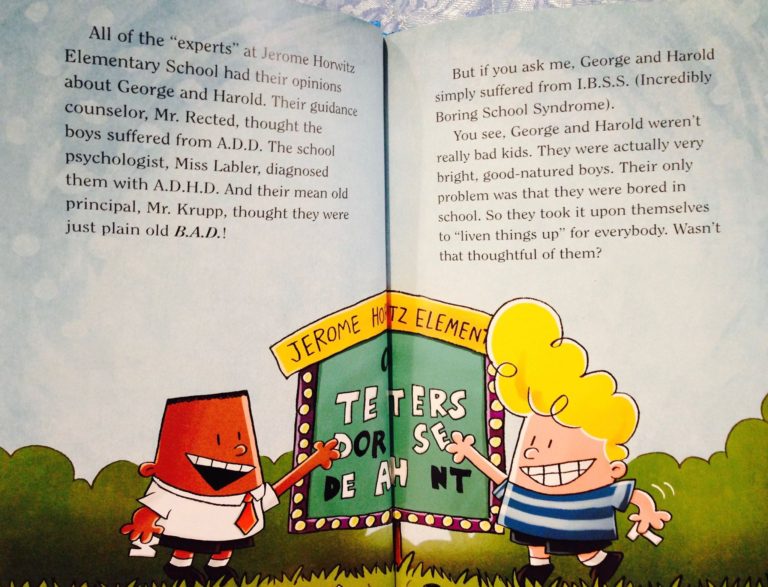 Captain Underpants And The Perilous Plot Of Professor Poopypants, by Dav Pilkey

The main characters in Captain Underpants are two little boys named George and Harold.  They are best friends who are both fun, creative, mischievous, and smart… oh, and they both have ADHD.  Pilkey makes it no secret that the boys have ADHD and explains what it is like for children with ADHD.  “George and Harold weren’t really bad kids. They were actually very bright, good-natured boys. Their only problem is that they were bored in school,” Pilkey writes in Captain Underpants And The Perilous Plot of Professor Poopypants (Yes, that is the actual title of the book).

Pilkey also includes some hidden ADHD messages behind his stories.  Movie Spoiler Alert: In the new Captain Underpants film, Professor Poopypants hates anything that is funny, so he creates a machine that zaps the humor out of people’s minds so that people will no longer think anything is funny.  Professor Poopypants tries to zap the humor out of George’s and Harold’s brains, but it doesn’t work, because the humorous part of their brains are too big and powerful.  We know that the brains of people with ADHD are hardwired differently.  ADHD is a condition people are born with and it is not something people can simply grow out of.  Nobody can “zap” ADHD out of anyone and honestly, why would they want to?  ADHD is a big part of what makes children like George and Harold so fun and clever and ADHD is a big part of what makes Pilkey so imaginative and passionate.  If it weren’t for ADHD, Captain Underpants wouldn’t even exist! 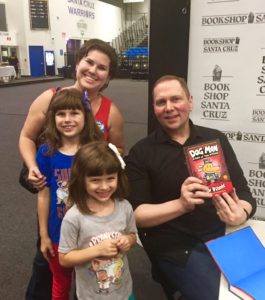 release of his latest Dog Man book.  It was such a huge honor to be able to hear Pilkey tell us about his ADHD and how he used it to his advantage.  He definitely gives ADHD a good name!  It is so important to have role models in our ADHDers’ lives that treat ADHD as a gift.  Pilkey is without a doubt, one of the very best role models for kids with ADHD today.  We are so happy we were able to tell Pilkey how much his books mean to us and how ADHDmazing we think he is.  It was definitely a moment I’ll never forget, because I could see in my daughter’s eyes that she was proud to be an ADHDer, just like Pilkey.  Just like Pilkey, she too is creative, intelligent, and remarkable and just like Pilkey, there is no doubt in my mind that she too will be going places.

Did you love this post as much as we did? Get more from Cristina Margolis at MyLittleVillagers.com